My goal is to automate the infrastructure and setup of Jenkins, so my time is spent on using Jenkins rather than setting it up. I also want this tutorial to be affordable, so everyone can get started with little financial investment.

By using Terraform, I can build and destroy the entire stack with a single command.

What you’ll end up with# 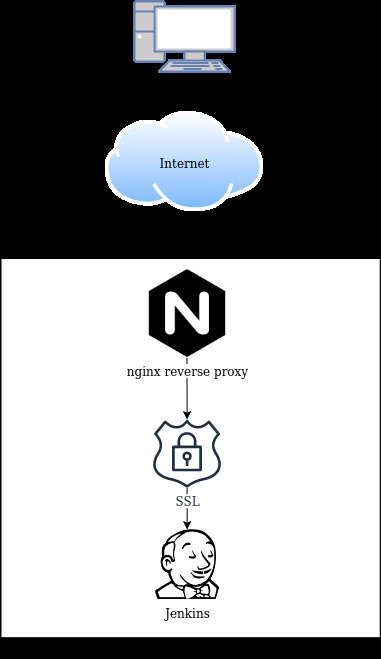 Terraform is a utility developed by HashiCorp that enables you to treat Infrastructure as Code (IaC). Feed it config files, and it will manage any cloud, infrastructure, or service.

Digital Ocean is a cloud provider with flat-rate billing. This tutorial can be adapted to use any cloud provider, but I enjoy the simple billing DigitalOcean offers.

Before running Terraform, you need to set up a few things. The good news is that you’ll never have to do it again once complete.

For HTTPS certificates, you need a fully qualified domain name (FQDN) that is publicly available.

Use your favorite domain registrar to purchase a domain. For this tutorial, I’m using Namecheap.

This tutorial does not support subdomains (ex: jenkins.myserver.com).

Under Manage domains in Namecheap:

If you’re following along, use these exact nameservers:

DNS propagation takes up to 24 hours. However, in my testing, it usually is faster. To validate the nameserver records are public, check the domain at who.is. 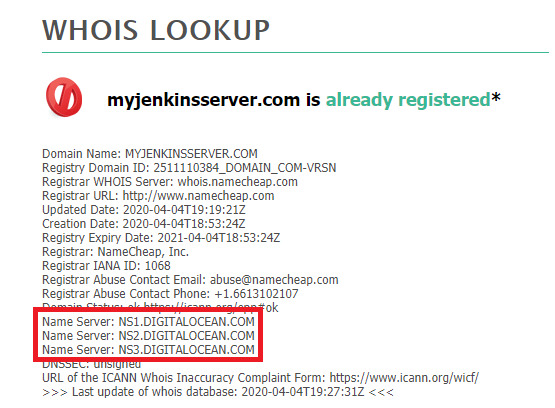 Once created, copy the token for safekeeping and export it as a variable.

Validate the following variables are set (check with echo $VARIABLE_NAME):

This part takes ~10 minutes; don’t be alarmed if it occasionally hangs 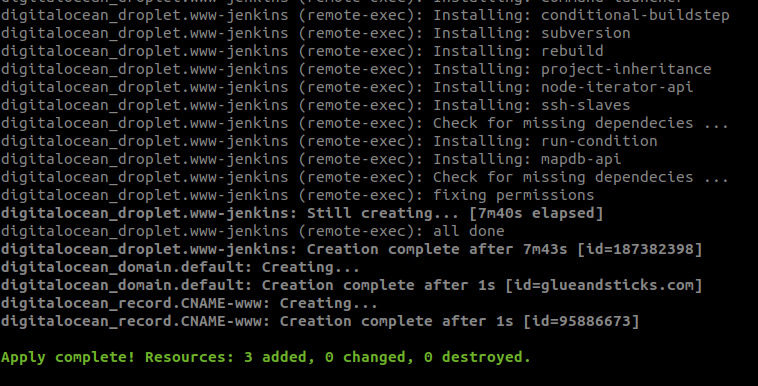 Automating SSL with Terraform is a “chicken and egg” problem.

There is a way to generate certificates with Terraform using a DNS TXT record challenge, but then I can’t use the certbot command to renew, configure and update my nginx config automatically. One day I might revisit this.

Until then, you need to run a few commands to generate certs:

That’s it! Let’s check it out# 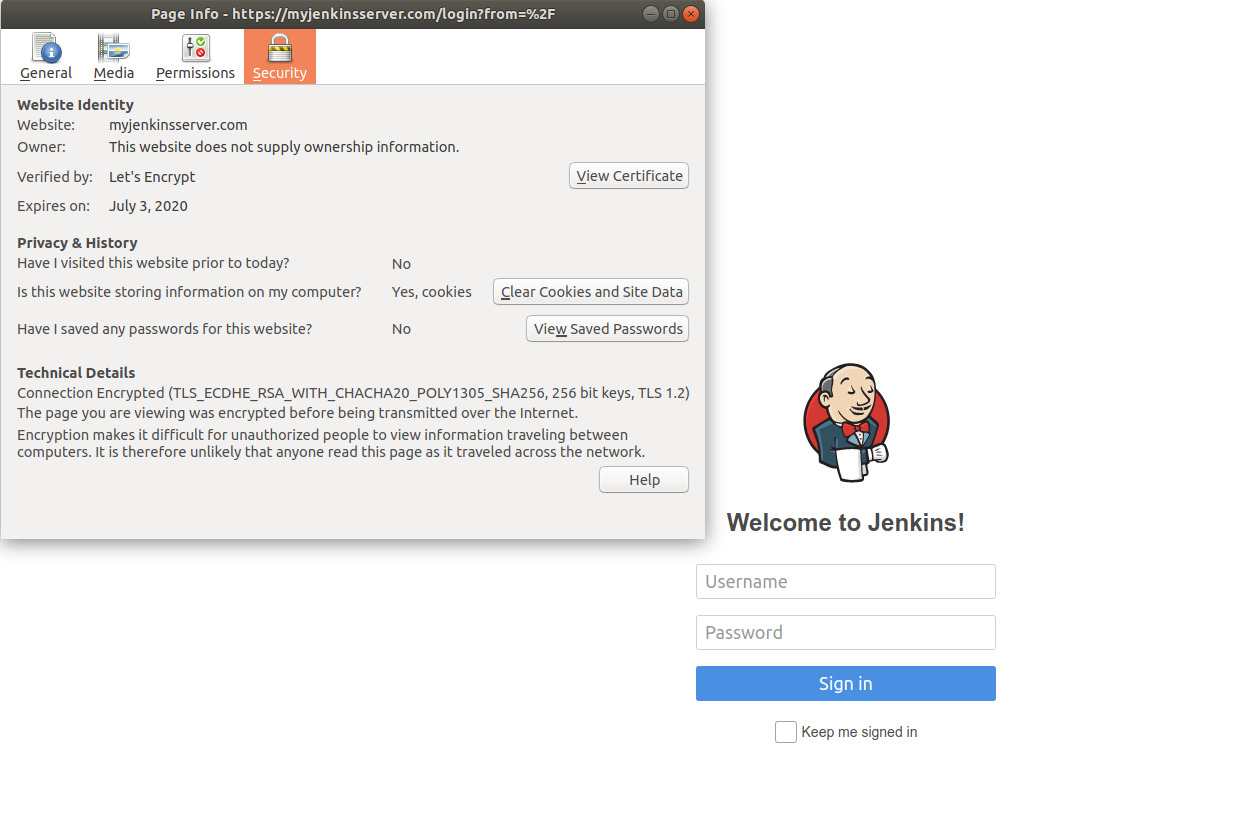 The credentials for initial login are:

Clean up with destroy#

When terraform apply runs, it checks the required variables and providers from provider.tf. Next, it uses www-jenkins.tf & domain.tf to build the server and update DNS, respectively.

install-jenkins.sh is a bash script that does all of the configuration on the server.

install-jenkins.sh should be an Ansible playbook and not part of Terraform. Terraform is for infrastructure and not configuration management. More information is below about what problems this causes.

install-plugins.sh was copied from a gist I found. You can automate the configuration of a Jenkins server with the Jenkins Configuration as Code plugin; however, JCasC is not present by default.

jenkins.yaml is the heart of our configuration used by Jenkins Configuration as Code. If you want to configure Jenkins or add pipelines, do it here.

nginx.tpl generates a nginx.conf file based on your domain variable. This is needed to support custom domains.

Terraform uses outputs.tf to capture information that is referenced later such as the server public IP (terraform output ip).

versions.tf validates your version of Terraform before continuing (>= 0.12)

DigitalOcean offers incremental billing at $0.007/hr, which is good to know if you want to destroy everything afterward.

I can also spin up the server, test, and spin it down when done.

Using install-jenkins.sh to configure our Jenkins server is kind of a hack. The problem is, that Terraform can only validate that our infrastructure exists but not if our script is completed successfully.

A better option would be to use Terraform to build our infrastructure and use Ansible to provision Jenkins / nginx. Geerling’s Ansible role would be perfect for something like this.

I mentioned earlier that install-plugins.sh is needed since the JCasC plugin is not present by default.

If I had deployed Jenkins using docker instead of the Ubuntu package, I could have built it with the needed plugins.

I purposely chose not to use Docker given the small server size, and, to be honest, I didn’t want to support building custom docker images for this.

I’m not sure what impact this will have on upgrades/installs.

I don’t particularly enjoy having to configure the HTTPS portion manually. One option might be to use Terraform and a TXT DNS challenge to get the initial certificates and then use an Ansible playbook to implement Let’s Encrypt.

If you’re not trying to nerd out on managing infrastructure, there is a managed CloudBees Jenkins Distribution on DigitalOcean. Although I believe the droplet size needs to be larger, leading to a higher cost.

Shout out to AutomatingGuy for such a great tutorial on using JCasC. Most of my Jenkins config is borrowed from his post.